The history of Terra di Nocera or of the mine of Samia medicinal earth is also the history of dissertation between scientists, doctors, chemists and naturalists that have investigated for a long time its nature, composition, its therapeutic virtues up until the XIV century.

In a 1636 Summary the physicist Giovanni Battista Bartolucci narrates about a dialogue between a pilgrim and a doctor.
Pilgrim: What is the treasure inside this water?
Doctor: The treasure that it is inside it, is made of fine gold, with precious earth, that have the power to make man happy, the way they were not before. 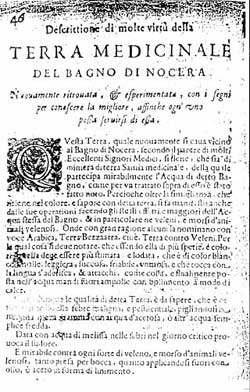 In the fourth treaty of the Nocera Baths in Umbria written by A. Camilli, there is the famous Recetta (recipe) of many of the virtues of the Medicinal Earth that the scholar calls in Arab “earth Bezaarra”, that means earth against poisons.
Along the centuries, therapeutic use of the earth finds more and more supporters.

In the “Dissertatio” of February 10th 1700, doctor Luigi Dalla Fabra proves that the Earth from Nocera, very rich in alkaline salt, can be listed in those medicinal semi-minerals with absorbent and sweetened power to take away and overcome bad moods, that, according to the traditional theory starting from Ippocrate’s, was deemed the cause of illnesses.

Domenico Moricini, in 1807 in a medical-chemical Essay, sharply links the Earth virtues and the history of Medicine: “Medications used to cure internal and external body pain are not the results of philosophical meditations nor preconceived theory on the diseases nature, but only the result of a fortunate empiricism, of man’s natural instinct or, finally, of a wisely observation of the power of nature to defeat illness and its cause”.

Properties and virtues of this Alba bolus are analyzed and recognised until more recent times. In 1928 professor Laborde, from Pharmaceutical University of Strasbourg, declares that curative earth, taken regularly and periodically, is the gift that purifies, vitalizes, repairs and restores.
It is a strong dinamogeno that re-establishes the stable equilibrium, awakening the deficient gland activity.
Actually a lot of scholars recognise a rationale about the traditional notions, resulting from that fortunate empiricism, which was mentioned by the chemist Morichini. With the vigorous return of natural medicine, the praise of the clay is founded and explained on the “nature intelligence”.
The clay – writes Dextreit – operates with discernment: denies the proliferation of microbes, of pathogenic bacteria, viruses, parasites and contemporaneously helps the reconstruction of cells. It is an intelligent strength, conversely chemical medicines defeat everything without consideration.
There are no doubts on the antiseptic, antitoxic and healing proprieties of the clay, used for external use, in powder and compresses. Its proprieties are polyvalent and we can agree with Valnet on the fact that the analysis of the clay is not enough to explain all of its uses. Therefore, we are forced to admit that so far we have not found the explanations for many mysteries…..

After all, clinicians and scientists know, as Democrito already knew, that the truth is at the bottom of the well and that when dealing with nature – as Goethe wrote – the more you dig, the more you notice you have a lot more to dig, because you can never reach the bottom.

A famous clinician, Augusto Murri, claimed that “men of our times and maybe our progeny need an arduous virtue: the resignation of ignorance.
Scientists and clinicians must learn to admit to ignore many things. Sincerity is also for a scientist one of the most precious qualities: he was never afraid to confess to ignore many things: on the contrary, a knowledge without the unknown is unthinkable. Be aware to notice to understand this borderline”.